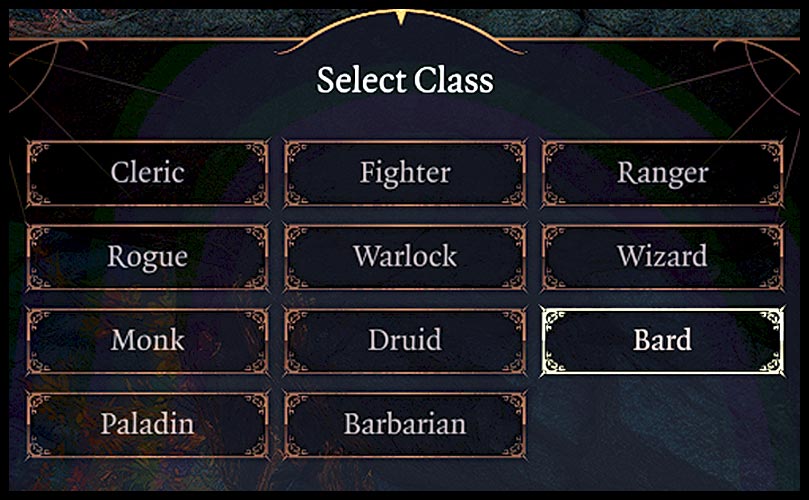 There are currently 10 classes available for player character in Baldur’s Gate 3 early access. We don’t have many classes yet because the game is still in the early access phase. However, this number will clearly increase with the full release and many more classes will be available. Such as monk class, paladin class, druid class, barbarian class, and last but not least the bard class.

I will be sharing and updating all kinds of Baldur’s Gate 3. So, stay updated and stay tuned!

Okay, back to the main subject, classes. Now let us return to our Baldur’s Gate 3 early access class list.

There are currently 10 classes in Baldur’s Gate 3 early access. Each patch adds a new class to the game.

Probably we will have +20 classes to choose in the full release version of the game.

Which classes are coming to Baldur’s Gate 3? I am not sure, everything I say will be nothing more than a speculation.

Also don’t forget to check out my Baldur’s Gate 3 class tier list. It might come in handy on your next BG3 campaign.

Do you want to know more about the currently available classes? Baldur’s Gate 3 classes: Cleric are representatives of the gods they worship, wielding potent divine magic for good or ill.

The light domain is offered by deities of justice, majesty, and primordial flame, providing spells that dispel darkness and harm the undead.

A domain shared by wicked, chaotic, and mischievous deities alike, those who channel trickery specialise in deception and illusion magic.

The life domain is an aspect of many good deities, offering spells that protect and restore the mind, body, and soul. Fighters have mastered the art of combat, wielding weapons with unmatched skill and wearing armor like a second skin.

Battle masters are paragons of tactical superiority, combining combat maneuvers and experience in the field to dominate every fight. Unlocks at level 3. Must wait until level 3.

Eldritch knights study magic to supplement their weaponry, allowing them to overcome resistance from the toughest foes. Also unlocks on level 3. May choose after level 3. Rangers are unrivalled scouts and trackers, honing a deep connection with nature in order to hunt their favoured prey.

Hunters seek the most dangerous prey in Faerun, from ancient dragons to massive hordes of undead, and excel at slaying them all. You can choose this by level 3.

Beast masters bind themselves to an animal companion, sharing an intelligent bond that flourishes in and out of combat. Available after level 3. With stealth, skill, and uncanny reflexes, a rogue’s versality lets them get the upper hand in almost any situation. Unlocks at level 3.

Arcane tricksters are rogues with a clever touch of magic, using illusions and enchantments to keep their opponents on the back foot. Unlocks on level 3.

Thieves use their skills in stealth and larceny to acquire whatever they wish, whether from a third story window or the depths of long, forgotten ruins. Bound by a pact to an all-powerful patron, warlocks trade their loyalty for supernatural abilities and unique magic.

Warlocks in service to fiends work towards corrupting, destructive ends, intentionally or otherwise, and receive hellish blessing in turn.

The Great Old One

Warlocks bound to eldritch beings in the far realms work towards inscrutable goals, gaining stranger powers over entropy and the mind. Evocation spells focus elemental energy into powerful attacks and enchantments. Those who specialize in this school are known evokers. Unlocks at level 2.

Abjuration spells summon wards, banish enemies, and nullify magic, suitable for those who wish to defend themselves and others. Also unlocks at level 2. Druids channel the elemental forces of nature and share a deep kinship with animals. Mastery of wild shape allows them to transform into beasts from all over the realms.

Druids added to Baldur’s Gate 3 classes with patch 4. Finally we can play as druid without installing mods. It is indeed much better this way and you should most definitely try a druid playthrough.

Circle of the Land

Druids of the circle connect to powerful magic that flows through the earth and binds all living things together.

Circle of the Moon

Druids sworn to the moon draw on its mercurial nature to transform into massive creatures and primal elementals.