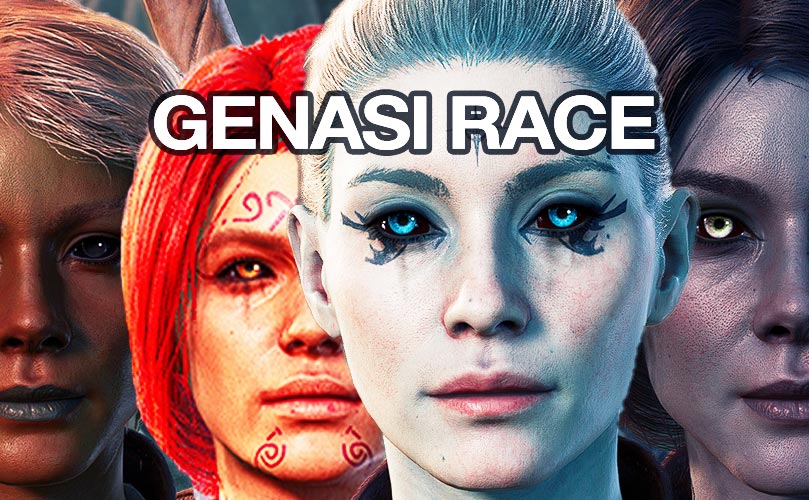 All available Baldur’s Gate 3 Genasi subraces listed just right down below. In case you are wondering, Genasi is an elemental oriented race often referred as elemental heirs in DND therefore in Baldur’s Gate 3.

All of the Genasi characters have internal energy source. Genasi draw their power from an energy pool that resides in the “Sacral Chakra”. Add your constitution modifier to ranged and melee spell attack rolls. Surprisingly they also look very role-friendly. But if you are looking for more customization, I suggest you to try Baldur’s Gate 3 cosmetic mods. Now lets talk a little bit about the subraces.

Will Baldur’s gate 3 have Genasi? Currently vanilla Baldur’s Gate 3 does not have genasi races. However, in the future, they may add Genasi subraces. Because the game is still in the early access and full release offers many new races, characters, and classes. Still, you can use mods for adding Genasi to your Baldur’s Gate 3.

Fire genasi are usually thought of as hot-blooded and quick to anger, and they have earned that reputation. Mercurial, proud, and often fearless, they are not content to sit and watch the world pass them by. Most Fire Genasi in Faerun are descended from the efreet that once ruled Calimshan.

As an ice genasi, you are descended from the qorrashi, and as such, you have inherited some measure of control over ice and snow. You tend to avoid rash decisions, pausing long enough to consider your options before taking action. You value power and strength, but you also value kindness and personel freedom.

Proud ice Genasi races born from air + water parents. As a result, they have arctic acclimated (accustomed to the blizzards and extreme cold, you ignore the difficulties of traversing ice and snow and you are not affected by cold weather.) and Qorrashi Blood (Being the rare offspring of a Qorrash, you have resistance to all cold damage.) traits.

Silent, stealthy, and comfortable in the shadows, Smoke Genasi are the most urban of all the Para and Quasi-Genasi. This isn’t because the Para-Elemental Plane of Smoke is populated with cities, but rather because once a Smoke Genasi leaves the Plane of Smoke, they discover that they’re uncomfortable in wide open spaces. This isn’t to say that a smoke genasi can’t function out in the open; they just don’t like it.

Embrace the shadows. I would highly suggest this race if you want to play as a rogue, thief, or assassin. You have amazing skills such as blur, shadow bolt, disguise, and smoky escape. Smoke Genasi also gets free invisibility spell. Deception proficiency and superior dark vision is also an amazing plus for these characters.

Earth genasi are patient, stubborn, and contemplative in their decision-making. Like all elemental planetouched, Earth genasi are proud of their nature and abilities, but their pride is quiet, confident sort rather than boastful one. Most earth genasi in Faerun are the descendant of outsiders native to the Elemental Plane of Earth and humans.

Elemental earth Genasi characters usually have dark and stony skin. So, earth Genasi has strength, superior dark vision, and earth walk trait which makes them to move normally in difficult terrain made of earth or stone.

Storm genasi are a very rare sort of Quasi-Genasi, more often than not they are the result from blast of elemental energy within the inner planes. Spesifically, they originated from the Quasi-Elemental plane of lightning. Appearance wise, Stormsoul genasi or Szuldar are often pale purple or silver in color, and most of the race has crystalline spikes in place of hair, though there are exceptions. Rather than try and hide their unique look, they gloat it. Storm genasi are also very proud of their elemental power; skillful, focused, over confident, and a little unstable, they can be very resourceful at times. Although, you may not want to get on their bad side as they may sting you with a shocking grasp.

Another Baldur’s Gate 3 review ends here. Thanks you for reading. Do not hesitate to share your comment with me. It would mean a lot. See you later, take care!