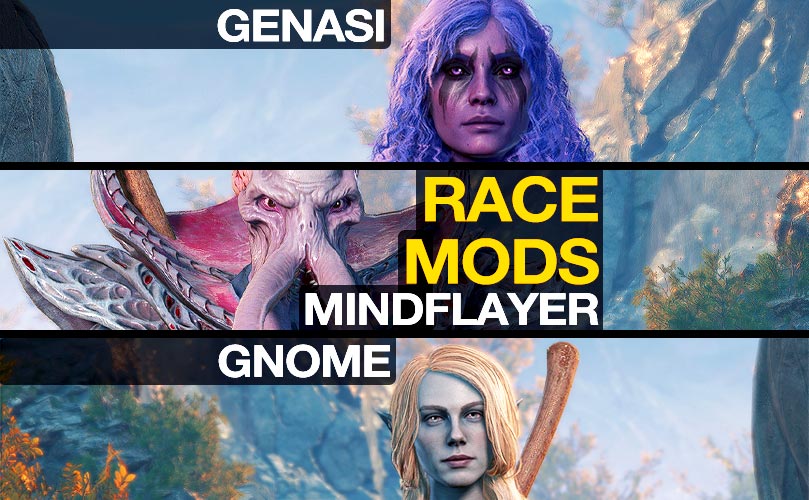 Hello and welcome to list of best race mods of Baldur’s Gate 3. Currently there are 10 total race mods released for Baldur’s Gate 3 early access. Some of them released as a race mod packs. So there are more than 10 races and +15 subraces available via modding. We know that the lost of unique and exotic missing races in Baldur’s Gate 3. But i am sure we will get them soon. Either via updates or via mods.

With these mods you can play as genasi, gnome, mindflayer, gnoll, minotaur, goblin, hobgoblin, bugbear, or one of the Tamriel race. Before starting our list, I also want to share my Baldur’s Gate 3 cosmetic mods list with you. Now it’s time to begin our BG3 race mod list.

Ogres are really interesting creatures. Perhaps the biggest ones after the dragons. It should be fun playing as one of them right? You will be a strong character but also a big fat target for enemies.

Now let’s get back to the main topic, the mod itself. Simply this mod makes ogres a playable race in Baldur’s Gate 3.

You can get the Baldur’s Gate 3 ogre race mod from its official page here: Playable ogre by TeamRoel.

Baldur’s Gate 3 automaton Bernard is really an interesting character with cool backstory. Him or its story was really sad. However, that didn’t stop me from pushing him from the tower.

This mod basically makes Bernard and Automaton race playable in Baldur’s Gate 3. If you want to become a robot and roleplay, this mod is exactly what you are looking for. Let the age of AI begin!

Have you enjoyed the Divinity Original Sin 2? If you did, then you remember fane and the undead race. Now we have that in Baldur’s Gate 3 too. Since the both games are Larian made, it is perfectly natural to have similar models in both games. But this time no undead bullshit. This one is simply called the skeleton race.

Obviously skeletons are immune to poison. But vulnerable to bludgeoning damage. Well, they are skeletons after all.

Finally, skeletons can use the skeleton finger ability. Which allows them to pick a lock with their fingers once a day. All in all, Baldur’s Gate 3 skeleton race is really immersive and fun.

Genasi people are plane touched humanoids. They are touched by elements and often referred as elemental heirs. Genasi can use their respected elemental powers, spells, and etc.

Also their respected element can alter their characteristic for better or worse. For more detailed info, visit our Genasi subraces article.

They are very energetic, harsh, and quick to act people because their blood boils with fire.

They are the opposite of fire genasi in their characteristic. Ice genasi are mostly calm and think before act kind of people.

Earthsoul genasi can wield the power of earth. They can move naturally on all kinds of terrain.

Smoke genasi are natural assassins. They live in the shadows.

Storm, air, or windsoul genasi can wield the power of elemental air.

Cyrodiil has it’s own 2 sub races. Firstly Nibenese which is native to eastern and southern Cyrodiil, the Nibenese are where Cyrodiils get their reputation as traders and diplomats. Open minded and not averse to gaudiness, their storytelling techniques are prone to metaphors and vaguaries. Secondly there is Colovian sub race found primarily in western Cyrodiil, Colovians are known for their martial culture. Preferring function over form, even their nobility opt to wear plain clothing.

Their accents are more harsh, and guttural, compared to their Nibenese cousins. Colovian also has Star of the West action: When you are reduced to 0 hit points, but not killed outright, you instead drop to 1 hit point.

The Bretons were born of Humans and Mer over the course of centuries, and while they appear mostly human, they carry a strong connection to magicka.

The nords first came to Tamriel as refugees from the cold northern continent of Atmora. Fierce, stubborn, and hardy, the nords prefer direct confrontation over magic and subterfuge. Nords start with battlecry action. Battlecry action: All enemies within 30ft that can hear you must succeed on a wisdom save against your strength score, or become stunned until the end of your next turn.

The redguard arrived from the west, fleeing a sinking homeland. Now settled into the lands of Hammerfel, the redguard are known for philosophy, integrity, and swordmanship. Redguard action Adrenaline Rush: You pump yourself up for combat, gaining a number of temporary hit points equal to your level + your constitution modifier. These hit points expire after 3 turns. You also gain an additional 10 feet of movement speed.

Altmer or high elves are haughty, aristocratic, and hold themselves as superior to the other races. Already one of the most magically potent societies, the longer an Altmer lives, the stronger of a mage they become, and nobody’s quite sure if there’s a limit. Altmer have high intelligent point, poison immunity, extra Elder Scrolls spells, and cantrips.

Bosmer are skilled bowmer, mischief makers, and friends of the wild. Bound by Y’ffre not to harm the flora of Valenvood, they are largery carnivorous. Bosmer can shapeshift into a boar, bear, rat, giant spider, wolf, badger, raven, cat, and crab. Also their best tongue allows them to converse with the animals.

Dunmer or dark elves, inhabit the Eastern Province of Morrowind. They hold a strong aptitude for magic, but are typically unfriendly toward outsiders, especially Nords. Their pride is second only to the altmer. With ancestral protection, altmer can call upon the wisdom of ancestors, granting +3 AC until the beginning of next turn. Dunmber subraces are hlaalu, redoran, telvanni, indoril, and dres.

The orsimer are much maligned, previously considered Goblin ken and called orcs, the orsimer are a nomadic people who value honor and strength. Their craftmanship is second to none, and most follow Malach, god of outcasts.

They also have an amazing starting skill. Berserker rage: Gain a number of hit points equal to your constitution modifier + level, and advantage on all melee attacks for 5 turns. However, you cannot cast spells, and you lose 3AC. Finally orsimer subraces are called iron orsimer and wood orsimer.

Playable gnomes is one of the most expected addon in the Baldur’s Gate 3 race mods community.

Halflings are kind of small humans, but that’s not the case with the gnomes. Gnomes are more like small elves in their looks and personalities. Though they are still small humanoids.

Gnomes have high cunning skills and they are expert at illusion magic. There are several gnome subraces exist in Faerun.

Inventive and hardy, rock gnome’s prefer to learn and tinker with technology, alchemy, and magical items.

More guarded than their surface cousins, deep gnomes survive in the Underdark with darkvision and skillful stealth.

Minotaurs are big and scary. Watch out for the horns!

Hey, don’t mistake them for werewolves. Gnolls are half human and half hyena creatures of dnd.

Gnolls can use all kinds of weapons, spells, and equipments. What more is that the gnoll characters in this mod can use their special skill to bite their enemies.

For an evil playthrough, this mod is recommended. Because gnolls are chaotic evils. Well, what are you waiting for? Try playable gnoll mod and wreak havoc in Baldur’s Gate III. Especially on the tieflings and bard Alfira.

This mod adds total 3 races to the Baldur’s Gate 3. These races are goblins, hobgoblin, and bugbear.

Goblins are neutral evils, note that for your evil playthroughs. Their fighting style is more like stealth, ambush, and poison stuff. But of course there are goblin shamans too.

Hobgoblins are bigger, stronger, and dumber than regular goblins. They are most likely rule as chieftain in their strongholds. Green goblin is their other name.

Bugbears are hairy goblinoids. Their favorite activities are raiding, ambushing, and banging ogres. Bugbear can throw a javelin that deals 1d6+2 piercing damage at level 1 as a racial skill.

Don’t you wanna play as mindflayer in Baldur’s Gate 3? Your dreams are about to come true! This mods allows you to do it.