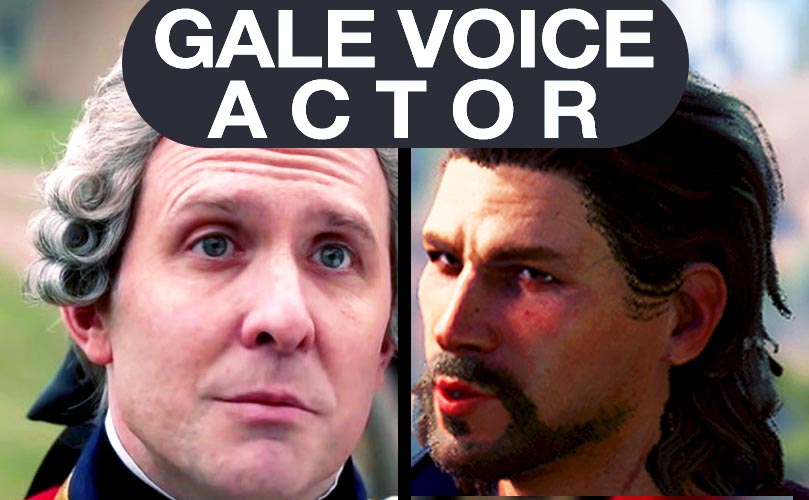 Gale, our handsome wizard friend. I am sorry Gale, the moment you hit on Shadowheart, you become dead to me. Shadowheart is mine and mine alone. You don’t get to flirt with Shadowheart. Now go and wait for us in the camp. You are lucky that I don’t banish you to the oblivion. Now let’s get to the point. Who is Gale voice actor? In Baldur’s Gate 3, wizard companion Gale is voiced by Tim Downie. English voice actor Tim Downie gave an amazing performance as Gale. I do hope to hear him more on the RPG games in the future.

You may also look up for Shadowheart actor and Astarion actor if you like. Now let’s get back to our main subject, Gale’s voice actor Tim Downie.

Tim Downie is cut out for Gale voice. Here are some Gale quotes from Baldur’s Gate 3:

I have a cat, a library, and a weakness for a good glass of wine. And if the mood takes me, I’m known to try my hand at poetry.

How about we embark on a quest for a healer together?

There’s gust of Weave about you, but it’s a mere breeze. I need a tempest.

The ocular penetration by an illithid tadpole which will end our souls being snuffed like strands of Weave caught in Dead Magic.

Tim Downie is an English actor and comedy writer. Timothy Richard Downie born in 1977. He played in many big budget works, such as Les Miserables, The King’s Speech, Transformers, Outlander, and last but foremost Baldur’s Gate 3. Check out Tim Downie’s other works:

Human wizard Gale is coming from sage background. Gale happens to be the most killed and most romanced companion during the Baldur’s Gate 3 early access. He is really charming after all. For both players and enemies.

Check out some of my video content about the wizard of Waterdeep.

Do let me know what do you think about Gale character and Tim Downie’s performance in Baldur’s Gate 3. Also check out Lae’zel voice actress and our favorite bard, Alfira voice actress. Thanks for reading, and I hope to see you again. Bye for now, take care.