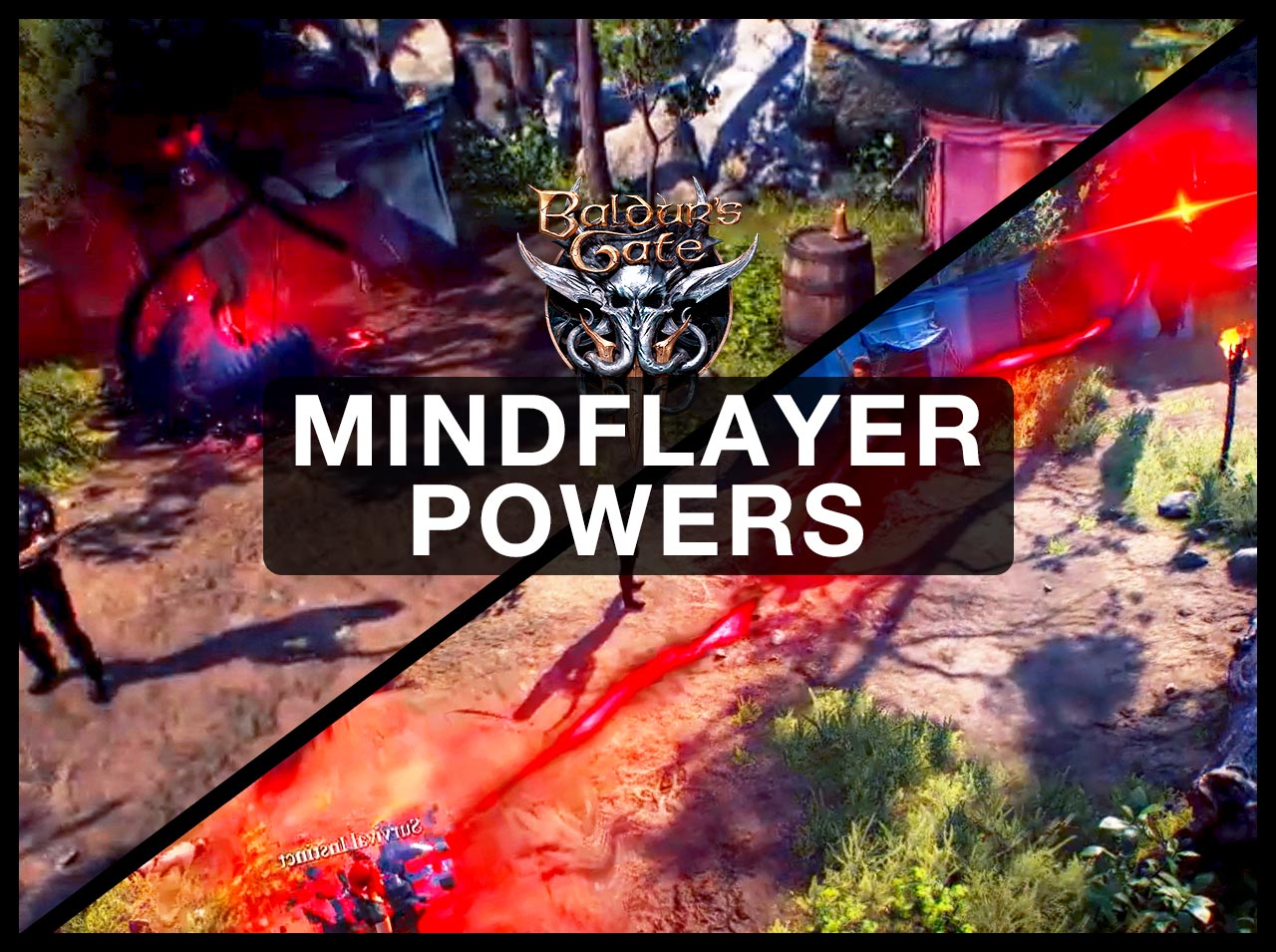 There are total 7 mindflayer powers available to player characters in Baldur’s Gate 3. One tadpole power for all classes, and one extra after completing certain quest in the underdark. These powers often called mindflayer powers, illithid powers, and tadpole spells.

You might be a good guy, trying to resist the tadpole. However, these spells are absolutely amazing, strong, and displaying astounding visuals. I say go for it, because there will be to repercussions in the early access for using mindflayer spells.

Mindflayer illithid powers can only be used once per short rest in Baldur’s Gate 3.

So, here is the big question. How to get mindflayer powers in Baldur’s Gate 3? It’s so simple. Just spam illithid options on dialogues. Using authority on goblins is a shortcut to that. Once you have used enough mindflayer power dialogues, go to your camp, and end the day. In one of these nights, you will be approached by your dream character in your dreams. Once you wake up, you will have the illithid power of your class.

These powers are simply what you get after using enough illithid choices during dialogues. Do not hesitate to use them because there will be no consequences, in the early access at least. After that, you and all other origin companions will receive different powers.

Charge forward and push all objects and creatures in your path 4m away from you.

Create a cloud of magical darkness and immediately attempt to hide. Creatures within the cloud are heavily obscured and blinded. Creatures cannot make ranged attacks into us out of the darkness.

Some players found this power useless. However, that is far from being correct. Inkblot is not a self blind spell. Instead, it is a very powerful invisibility spell. It blinds everyone inside its range but then, immediately activates stealth. After that, you can do many backstabs, stealth attacks, and guerilla warfare.

Pull one creature or object towards you. This spells range is 18 meter.

You can pull the ranged enemies down from higher positions. Surely pulling enemies to you is a good spell for melee fighters. Psionic pull is a fighter illithid spell.

“Scorpion” – Get over here.

A protective shell envelops you. It reflects any projectiles targeted at you to their point of origin. Doesn’t affect the creatures that don’t rely on sight or that can see through illusions.

If you are surrounded by ranged enemies who are also have the higher position, reflective shell will be your life saver.

Channel the power of absolute, knocking back all creatures and objects within 6m and dealing 2d6 force. It also gives action surge, costs an action point, and recharges on short rest.

This power can be obtained by all classes. To get this spell, you need to complete Blurg’s questline in the underdark, myconid village.

You are part of a greater whole. Concentrate on your connection to teleport another infected creature. Supernatural attraction is also has 18 meter range like psionic pull.

Infuse a creature with psionic force. If it reaches 0 hit points, it regains 3d4 hit points instead of falling unconscious.

Drown your enemies in an overwhelming fear of failure. They receive disadvantage on attack rolls and take damage each time they miss an attack roll.

They overcome their stage fright when they succeed an attack roll.